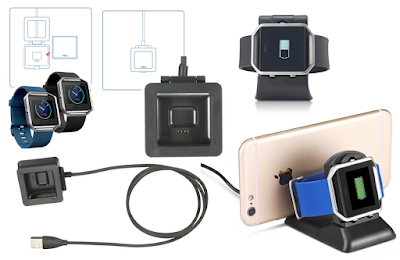 Fitbit Blaze is water resistant, splash and sweat-proof, but is not swim-proof. It's important to ensure that you can make the most of your Fitbit Blaze, you can use the free Fitbit app available for iOS, Android, and Windows 10 devices via Fitbit Help. Fitbit Blaze smart fitness watch from the official Fitbit Store. PurePulse continuous heart rate, Connected GPS, on-screen workouts & more.

Fitbit Blaze a step-counting and sleep-tracking smartwatch which consists of some playful animations, and aims to keep you focused on your health. It will be your smart partner to oversee your health. If you have recently purchased the Blaze, you may need to read this tutorial of Setting up Fitbit Blaze. You will need a compatible mobile device for key features such as notifications, music control, and connected GPS. But if you don’t have any compatible device, you can use a computer. 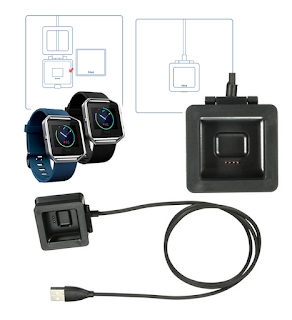 Your Fitbit Blaze comes equipped with a rechargeable lithium-polymer battery. If your battery is low, charging fully may take one to two hours.
Charging Instructions below
Advertisement

How to charge Fitbit Blaze

1. Plug the charging cable into the USB port on your computer.

2. Remove the tracker from the wristband. To do so, push the screen gently so that it detaches from the frame.

How to put fitbit blaze in frame
3. Put the tracker inside the charging cradle with the screen facing towards you and the four gold prongs aligned.


4. Close the cradle cover. A large battery icon appears temporarily on the display to let you know that charging has started.


While your tracker is charging, a small battery icon in the top left corner while charging so you can check progress. A large green battery icon means the battery is full.

The battery icon in the top left corner of your Blaze screen represents remaining battery life as of the last sync so How Often Should I Charge My Fitbit resolve. You can also find this icon on the Fitbit dashboard.

As we mentioned above that compatible mobile device is required for key features such as notifications, music control, and connected GPS. Therefore Fitbit Blaze setup problems, it is important for you to know about this setting up Fitbit Blaze using a mobile device. This setting up process is very easy, since the Fitbit app is available for more than 200 mobile devices that support iOS, Android, and Windows 10 operating systems.

Here are Fitbit Instruction Manual steps to get started:

Although it is important to set up your tracker on your mobile device, but if you don’t have any you can also set up and sync your tracker on your PC running Windows 10 using the same Fitbit app available for Windows mobile devices. For Setting up Fitbit Blaze on your PC running Windows 10, you can get the app in the Windows Store (usually called Store). Search for “Fitbit app” in the Store, then download and install it on your PC. If it is the first time you download an app from the Store to your computer, you will be prompted to create an account. If the app installation is complete, open the app and follow the instructions to create a Fitbit account and set up your Blaze. If your computer has Bluetooth, you can set up and sync wirelessly, otherwise you will need to plug your tracker into your computer directly via the charging cable and the Fitbit Blaze accessories. This direct plugging is also helpful if your computer has Bluetooth but the signal is weak or problematic.

You can set up Fitbit Blaze with a computer to see your Fitbit stats on Fitbit.com if you don’t have a compatible mobile device. anyway, if your computer running Windows 8.1 or below, you will need to purchase a wireless sync dongle from fitbit.com/store in order to set up your tracker. First thing you need to use this setup method is to install a free software application called Fitbit Connect that allows Blaze sync its data with your fitbit.com dashboard.

Here are some steps Fitbit Blaze 101 guide you need to install Fitbit Connect and set up Fitbit Blaze:
1. Install the wireless sync dongle
2. Go to http://www.fitbit.com/setup.
3. Scroll down and click Fitbit Blaze buttons for the option to download.
4. Save the file that appears (FitbitConnect_Win.exe) when prompted.
5. Find and double click the file to open the installer program.
6. Click Continue to move through the installer’s instructions.
7. Choose Set up a New Fitbit Device when prompted.
8. Follow the onscreen instructions to create a Fitbit account and connect your Blaze.

Otherwise, you’ll be prompted to put the tracker in the charging cradle and plug the other end into a USB port on your computer. During the process of setting up Fitbit Blaze, you’re asked about your personal information which can be used to calculate your basal metabolic rate (BMR), in order to help determine your estimated calorie expenditure. All of your personal information is private unless you go into your Privacy settings and opt to share age, height, or weight with Fitbit friends. Now, after this setting up process is complete, you are ready to get moving.