How to Update Fitbit Blaze

How to Update Fitbit Blaze 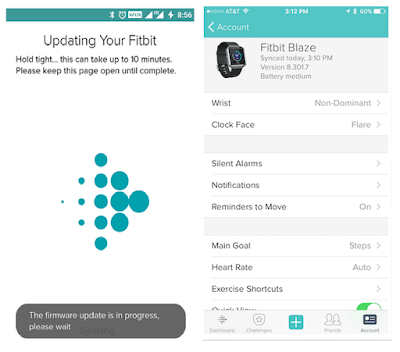 
How to Update Fitbit Blaze


First make sure your Fitbit tracker is charged, since a firmware update can take several minutes and is demanding on the battery. Be aware that if you update your Fitbit at midnight (when the tracker resets its data) you may see an inaccurate step count for 24 hours.

Choose a section below for steps on how to initiate the update.

Verify that your Fitbit Blaze is the latest version of the Fitbit app is installed on your device.
With your charged tracker nearby, open the Fitbit app.
Follow the prompts onscreen and keep the tracker close to the mobile device during the update. If the update is slow, don't remove your tracker from your account as a troubleshooting measure.
Advertisement

If the update process won't start or if it starts and then stops, see Why can't I update my tracker?

How to Update Fitbit Blaze Firmware 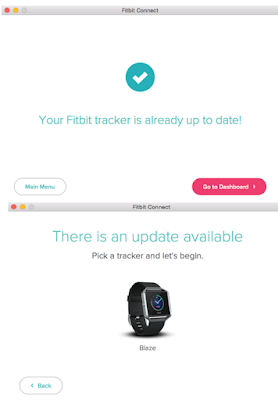 If your tracker came with a wireless sync dongle, make sure its plugged into a USB port on your computer.
Unless you installed Fitbit Connect for the first time recently, verify that you're using the latest version:

If you cannot find the icon, you may need to reinstall Fitbit Connect from http://www.fitbit.com/setup and follow Fitbit Blaze instruction manual below:
Fitbit Blaze Tutorial
Advertisement

When prompted, log in to your Fitbit account. Fitbit Connect will sync your tracker and then look for a Fitbit Blaze firmware update.

If an update is found, Fitbit Connect will display a progress bar until the update finishes.

If your tracker has a screen, you'll also see a progress bar there.

Keep your tracker close to the computer during the update, which may take several minutes.

When the update is done you'll see a confirmation message and your tracker will restart.You're all set.

If the update fails to complete, try again.

How do I find my current firmware version?

In the Fitbit app, tap or click the Account tab and then tap your tracker tile. You'll see the firmware version number under your tracker's name.

On the fitbit.com dashboard, click the gear icon in the top right and select your tracker to find the firmware version. Note that with Fitbit Blaze and Fitbit Surge you can swipe to the Settings screen to see your current firmware version. Advertisement