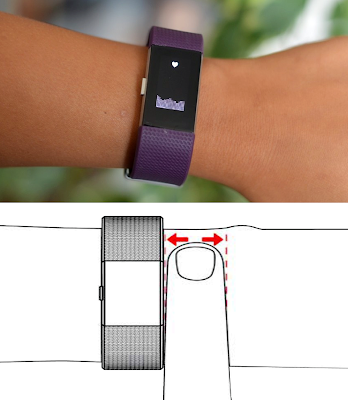 The Fitbit Charge 2 feels a lot like the Fitbit Alta that slightly larger. It has the same basic design, a silicone bracelet with a rectangular OLED display module in the middle. There's a single button on the left side of the display, and a built-in continuous optical heart rate monitor underneath Fitbit Charge 2.

The modular design Charge 2, like the Fitbit Alta and Blaze, the Fitbit Charge 2 has a so you can pop out the display and swap it into different leather and silicone bands come in three sizes: Small (for wrists 5.5- to 6.5in in circumference), Large (6.5- to 7.7in), and XL (7.7- to 8.9in). Get The Fitbit Charge 2 User Guide PDF as your document.

For US$149.95, you get the Fitbit Charge 2 with a stainless steel frame and a band in black, blue, plum, or teal. For US$179.95, you can get a Special Edition model with a gunmetal frame and black band, or a rose gold frame and lavender band.

Additional Fitbit Charge 2 bands cost US$29.95, while leather straps in brown, pink, and indigo are going at US$69.95. A simple push-slide mechanism pops the display module right off the band. 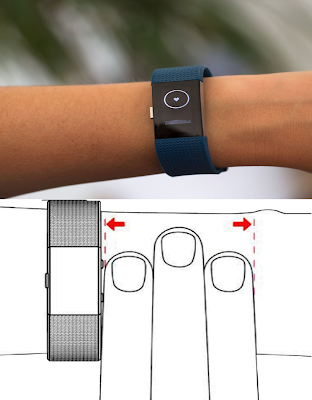 How to Wear Fitbit Charge 2

For all-day wear when you’re not exercising, your Charge 2 should usually rest a finger’s width below your wrist bone and lay flat, as you would normally wear a watch.

2. Do not wear your tracker too tight; a tight band restricts blood flow, potentially affecting the heart rate signal. That being said, the tracker should also be slightly tighter (snug but not constricting) during exercise than during all-day wear.

3. With high-intensity interval training or other activities where your wrist is moving vigorously and non-rhythmically, the movement may limit the sensor’s ability to provide a heart rate reading. Similarly, with exercises such as weight lifting or rowing, your wrist muscles may flex in such a way that the band tightens and loosens during exercise. If your tracker does not show a heart rate reading, try relaxing your wrist and staying still briefly (about 10 seconds), after which you should see a heart rate reading.

For greater accuracy, your tracker needs to know which wrist you wear it on (right or left) and which hand you consider dominant (right or left). Your dominant hand is the one you usually write or throw with.

During Fitbit Charge 2 setup you’re asked to choose the wrist where you're going to wear your tracker. Should you later decide to move your tracker to the other wrist, change the Wrist setting. You can also change your dominant hand at any time with the Handedness setting. Both settings are found in the Account section of the Fitbit app or in the Personal Info section of your fitbit.com dashboard settings. Hope you enjoy with your new tracker. Advertisement